Hi everyone,
I was born 1 september 1973 in town Mitrovica in ex Yugoslavia, nowadays Kosovo. When I went to my first trompet lesson the next door was wide open and I saw the guitar teacher Petar Rakiç playing an unbeliveably beautifull Lobos piece. It was year 1983, I was 10, I was overwhelmed, that moment I must of decided to become a guitar player which I realized later on.

In 1986 when I was 3rd grade of music school I competed with 4th grade and won the title of Best Guitarist of Serbia. In 1989 recorded few songs with my band "Horoskop", one of them became a hit on local radio station.

In 1992 I moved to Turkey as a student of Journalizm and Mass Communication in Istanbul University. Same year I started playing rock and blues in Engin Yorukoglu's club "Jazz Stop" 7 days a week. Here, my talent for sound and recording was discovered so in 1996 I started as professional sound engineer and studio musician in Fuat Guner's FT Studio. 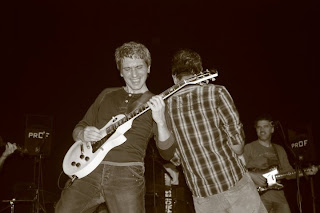 In 1998 I established my own studio (Studio 74). Down is a list of some albums (most with links) I've worked in my studio as well as some other studios:

2008 - Bekriya 2 - Balkania
(most of the arrangements, guitars, basses, all mixing and mastering)

In 2007 I had the chance to meet and work with Yngwie Malmsteen. We recorded string orchestra for track Eleventh Hour on his 2008 "Perpetual Flame" album.


In 2012'de I joined Volkan Özyılmaz's virtual instrument project "Volko Alaturka Drum".  Version 1.2.3 is released with my work in it.